A battle is upon us, and like any good battle royale there will only be one “Winner Winner Chicken Dinner” when the dust settles.  Speaking of which, I DO like the idea of a Popeye’s chicken dinner, with the biscuits and the mashed potatoes… hmmm… clearly that was the wrong analogy to start with.  But at least we know what is happening for dinner tonight.  Anyways, on to the REAL main course… the budding war between Fortnite, arguably the largest video game phenomenon in the world, and both Apple and Google, the largest tech names in the biz.  Ready to drop in?  It’s about to get really murky, REALLY fast…

In case you haven’t been following the news, both Apple and Google have removed Fortnite from their respective app stores claiming a breach of service agreement.  Epic Games, the creators of Fortnite, have offered their immensely popular Battle Royale mode free of charge on ALL gaming platforms, including PC, consoles, and mobile.  So how do you monetize a free-to-play game?  Through micro-transactions, of course!  And Fortnite has PLENTY of options there,  making their money back through their sales of “V-bucks”… virtual in-game currency that can be used for everything from purchasing in-game character “skins” to adding new content.  So far so good…  but now the plot thickens like a delicious stew.  You know, I really should stop writing these when I am hungry. 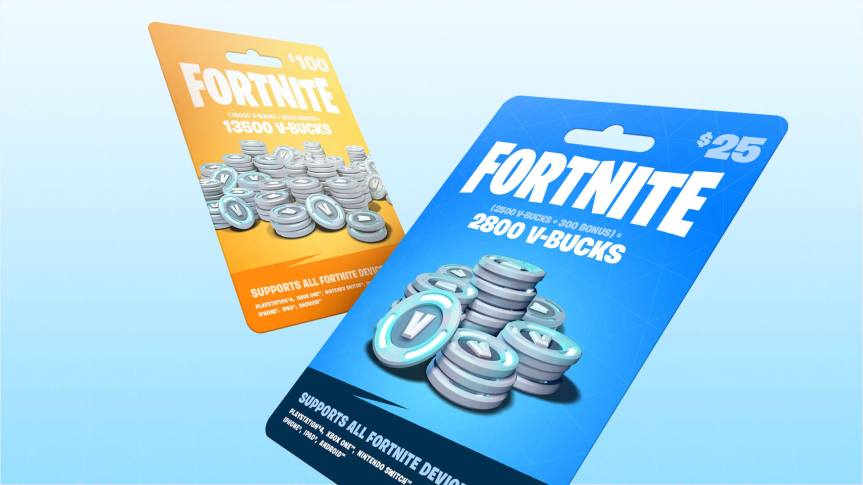 Both Apple and Google have a standard 30% royalty deal on all in-app purchases through their platforms, and the developers of Fortnite were simply tired of forking over such a high percentage of their game’s profits to the gatekeepers of the Apple and Google Play app stores.  Epic Games, in a bold move, decided to offer their in-game “V-bucks” for purchase externally, allowing gamers to purchase the in-game currency for Fortnite at a significant discount if they simply purchased them OUTSIDE of the mobile app stores, completely circumventing the 30% royalty charge.  Ingenious… except for the part where this was a complete breach of the standard contract all application developers pay to the tech giants who have built these mobile platforms.  And here we are now… Apple and Google are standing firm on an iron-clad contract which Epic is technically in violation of,  and they are exercising their right to remove them from further downloads or updates.  So who is right and who is wrong? 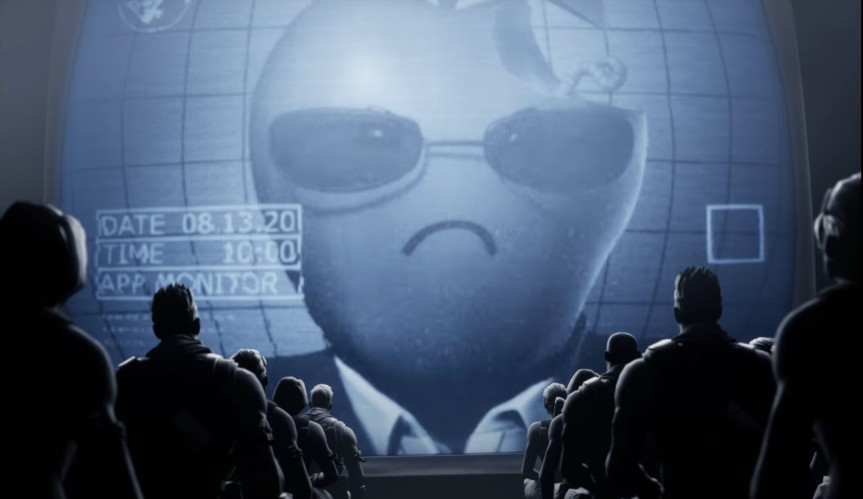 Epic has clearly created a megahit and should absolutely be compensated for the in- game purchases and DLC they are creating.  BUT, Apple and Google are supporting this on their mobile platforms and this is a standard agreement that EPIC agreed to when they signed up in the first place, long before they become big.  They tried to work outside the system, and with this many BILLIONS of dollars on the line I think we should all settle in for a lengthy showdown.  Epic, Apple, and Google will have their day in court… if they don’t settle out of court first.  But this opens up a bigger can of worms for ALL companies with apps that include in-game purchases but don’t have access to the legal resources that the developers of Fortnite do.

Who has the right to the profit?  The developer who took all of the risk, raised obscene amounts of financing, and staked their future on their app?  Or the massive corporation who is hosting the game on their platform and providing the entire world with the ability to discover it?  And more importantly, even if this “Fortnite War” reaches a resolution, the repercussions will reach far and wide as EVERY app developer will now want to follow suit if Epic Games manages to squeeze out a sweeter deal.

We answer this same question in our Christian lives more often than we think.  Once we perceive that someone has received a “better deal” than us, this thing gets very real very quickly.   Believers can easily become jealous of other followers for Christ for a variety of reasons.  Maybe they see others who have applied fewer restrictions on how they live their lives for the Lord, leading to resentment or even criticism over their “freedom”.  Perhaps others have seemingly been required to sacrifice less for God than we have, or have a “better and more exciting testimony” because of the way they used to live for the world while we sat quietly in our rooms and behaved.  This is exactly what Jesus was talking about during the parable of the landowner and his hired help in Matthew chapter 20…

Matthew 20:1-16  “For the kingdom of heaven is like a landowner who went out early in the morning to hire laborers for his vineyard. Now when he had agreed with the laborers for a denarius a day, he sent them into his vineyard.  And he went out about the third hour and saw others standing idle in the marketplace,  and said to them, ‘You also go into the vineyard, and whatever is right I will give you.’ So they went.  Again he went out about the sixth and the ninth hour, and did likewise.  And about the eleventh hour he went out and found others standing idle, and said to them, ‘Why have you been standing here idle all day?’  They said to him, ‘Because no one hired us.’ He said to them, ‘You also go into the vineyard, and whatever is right you will receive.’ “So when evening had come, the owner of the vineyard said to his steward, ‘Call the laborers and give them their wages, beginning with the last to the first.’  And when those came who were hired about the eleventh hour, they each received a denarius.  But when the first came, they supposed that they would receive more; and they likewise received each a denarius.  And when they had received it, they complained against the landowner,  saying, ‘These last men have worked only one hour, and you made them equal to us who have borne the burden and the heat of the day.’  But he answered one of them and said, ‘Friend, I am doing you no wrong. Did you not agree with me for a denarius?  Take what is yours and go your way. I wish to give to this last man the same as to you.  Is it not lawful for me to do what I wish with my own things? Or is your eye evil because I am good?’  So the last will be first, and the first last. For many are called, but few chosen.”

Much like these laborers, we all agreed to our relationship with Christ in a vacuum… a personal relationship built on what He requires from each of us.  Some people have different convictions based on the path the LORD has chosen for us.  That path will take us different places, have different requirements, and deliver different results for the good of the kingdom.  Some will work the whole day, and others will work the hardest part of the day.  But we all receive the same wages… forgiveness of our sins, reconciliation with our Creator in this life, and the gift of eternal life with Him and fellow believers in the life to come.

Hopefully Epic Games, Apple, and Google will find a happy place in their negotiations and restore Fortnite to their platforms as soon as possible… it is truly in EVERYONE’S best interest.  There is a lot on the line, and while Fortnite is a huge mega hit, any amount of time that it is gone gives another game a chance to fill that opening. This is a dangerous game that Epic Games is playing.  And as Christians we run the same risk… the moment we take our eyes off of the incredible gift of God we have been given and start to compare it with others we can allow bitterness, resentment, and jealousy to find a place in our hearts.  Our relationship with God is PERSONAL and our mission on this earth is JUST as personal and individualized.  As we wrap up, this reminds me of when Jesus dealt with the disciples in john 21…

I love that quote from Jesus… “What is that to you?”.   I can almost hear His smile as He creates the massive rumor that John would live forever simply because He refused to give Peter a straight answer to a question he honestly had no business asking.  I would challenge all of us to take a similar look at how we approach the gifts, the lives, and the callings of others… if the Lord called one to serve Him in a certain manner and it is DIFFERENT than ours, what is that to us?  If someone serves Him as a well compensated pastor of a mega church while we toil in obscurity, what is that to us?  If the Lord uses a repentant sinner from ANY background for His Kingdom, what is that to us?  Let us be thankful that we are ALL aligned with serving the Lord and receiving his gifts and grace freely.  We may be surprised with who we see, as well as who we DON’T see, when we get to the other side.  Let’s ALL work together in this field of souls and be thankful that He chose ANY of us to serve Him and take part in His kingdom. 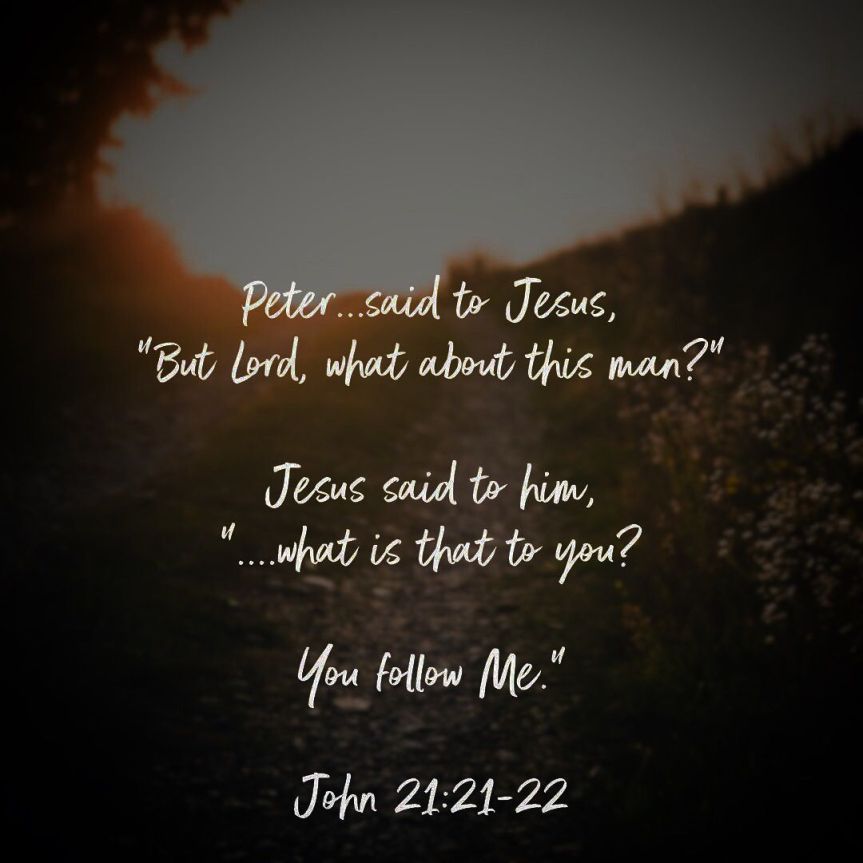