Ever since Yoshi made his official debut on the SNES in Super Mario World in 1990, he has demonstrated a skill set wholly unique to him.  We have grown accustomed to seeing the all-too familiar spectacle of Mario and his pals jumping on the tops of enemies heads to eliminate them.  I will note that in real life this practice is typically quite cumbersome and even if executed successfully only seems to anger them.  This is NOT recommended for dealing with actual conflict, so please do not try this at home.  We also often find characters such as Donkey Kong and the like picking up items such as barrels that have been conveniently left lying around for the purposes of hurling at one’s opposition, also typically with a great success rate.  But not Yoshi.  No… his friendly face and gentle demeanor holds quite the secret to his success…

You see, if you are a friendly neighborhood Shy Guy or Koopa that happens to find yourself crossing his path, he will probably do the following… EAT you alive, DEFECATE you into the form of an egg, and then carry you around with him so if the mood should strike he can throw you as a weapon at another adversary or obstacle.  That’s kind of dark and disgusting if you actually considered the mechanisms involved here.  How this game gets an “E” rating after a sentence like that is beyond my ability to comprehend.  Master Chief does none of those things and gets a “M” rating every time.  But I digress.

This world that is LITERALLY filled with rainbows and butterflies conceals the reality of Yoshi’s journey… hundreds of enemies are devoured and pooped out into cute little eggs throughout the course of the game, following behind Yoshi helplessly until the moment comes when he needs to throw what remains of them at a target to continue on his path.  Talk about an appetite for destruction.  Fortunately it tends to be a relatively quick and clean process and I have yet to observe any long-term intestinal trauma from Yoshi due to his carnivorous activities, so all seems to be good here.  But it got me to thinking… 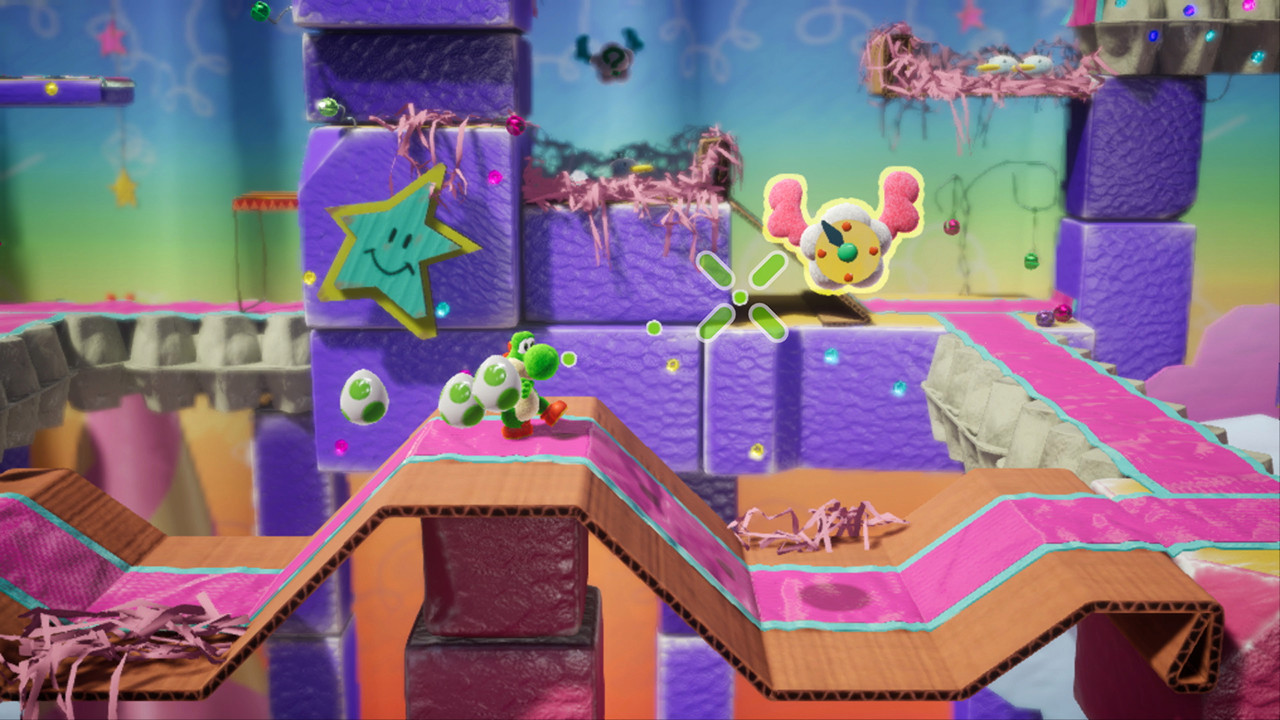 As gamers we observe so many different means and methods of dispatching enemies throughout video games, some incredibly clever and unique and others mundane yet effective.  But this particular method of not only swallowing your antagonist but then using them as a weapon against future challenges seems not only unique but also remarkably similar to how we can deal with challenges in our every day lives.  And NO, I am not espousing actual cannibalism or throwing our devoured obstacles as processed feces at one another.  That would violate multiple laws and is quite unhygienic.  Fun for a few hours, but let’s try to stay sophisticated here.   No, I am looking more at the principle behind the actions… seeing your enemies and obstacles as literal weapons for progress.

Previously we have looked at the importance of villains in your life and how they are critical to your journey (The Value of a Villain: Why we Need Darth Vader (John 11:45-53) We have even observed how the presence of opposition can be a guiding force to lead you towards your destination (CAUTION: Obstacles Ahead May Be More Vital Than They Appear (Judges 14-16, Acts 13, Luke 9:51)  But now we are in completely unmarked territory… what if the challenges you face are not merely important for your growth and direction, but are actually the MEANS of progression?  Let’s scratch a little bit deeper…

In the book of Esther we find so many rich topics for exploration, but the simplest through line of her story can be summarized pretty easily and should be relatable to all of us.  After all, this is a simple matter of:

Hold on, WHAT?  I feel like this one went off the tracks somewhere.  Ok, so maybe this isn’t as easily summed up as one of those romantic comedy Netflix subplots.  You know… the ones typically starring only one person that you “kind of” recognize and later realize that you only know them from a DIFFERENT crappy Netflix movie.  No, this one has a lot more moving parts to it.  But this IS the story… the king of Persia marries Esther, who won a national beauty contest and was made queen.  Unbeknownst to the king or just about anyone else, Esther is Jewish.  The chief advisor to the king (Haman) was possessed by a hatred for one Jewish man (who happens to be Esther’s biological uncle), but instead of targeting only him he decided to label the ENTIRE race as hostile terrorists who needed to be eliminated.  And that’s when the plot begins to thicken like Jell-O after a night in the fridge…

Haman tricks the king into signing a decree that would essentially act as a PURGE… on his selected date every citizen could murder any Jew they found in cold blood and take their possessions LEGALLY.  When Esther hears of this plot, she is predictably distraught.  Most princesses would consider exiting the ball Cinderella style right now, leaving even their GOOD shoes behind.  But with the guidance of her uncle and the providence of God on her side, she flips the tables on her aggressors by having the king sign a new law which would bring all of the Jews together and give them permission and support to defend themselves against those who wished them harm.  What was meant for their destruction was actually an opportunity to isolate their enemies, gather them together, and defeat them with the support of the king.  When the dust settled, the king’s evil advisor along with 75,000 fellow haters were destroyed by the very law they had attempted to use for the elimination of the Jewish race.

Now for the application… it is always easy to see when the deck is stacked against you.  And try as you might, the fact that your adversaries are lighting the way for your continued progress in life is not typically a comforting fact.  But like Yoshi, we have to stop looking at these as challenges and realize that these are the means by which we will move forward.  These temporary obstacles are not simply in your way… they are meant to be used as propulsion and ammunition.  Your testimony IS your weapon… everything you have fought and everything you are still fighting is what you are intended to USE in the battle.  If you feel overwhelmed with opposition, stop and see them for what they actually are… your undigested arsenal of weapons for victory.  Esther could have run, or she could have hid her true self and hoped nobody ever guessed her nationality.  Instead, she embraced the fact that she was a Jew and used the law that was meant to destroy her and her people to generate their greatest victory.

When Esther doubted her role in her own deliverance, her uncle had to challenge her with the following quote, which I feel is quite appropro for all of us:

Esther 4:14: Even if you now remain silent, relief and deliverance will come to the Jews from another source; but you and your father’s house will perish. Who knows—perhaps it was for a time like this that you became queen?”

Just like Esther, we can often feel like we are seeing life from her viewpoint… over-whelmed, running out of time, surrounded by obstacles and adversaries, and unable to imagine a path to victory.  But you are exactly where you are meant to be, or you wouldn’t be there.  And God has His hand on you and has not only guided your steps, but placed you in the only position in which victory could be achieved.  When David confronted Goliath, he did not bring a shield with him.  He never planned on playing any defense.  His faith was all the shield he needed.  He grabbed some rocks and took the offensive against the giant, and the rest is history.  I would encourage you to look at the challenges you face and see them as God sees them… your ammo.  Your weapons.  Your means of advancement… maybe not in the direction you would like to go, but in the direction He planned for you.

When we are feeling overwhelmed, it’s often because we think we are responsible for the outcome of our situation.  We aren’t… we are only responsible for our obedience (Exodus 4:1-12).  When we feel outnumbered by opposition, it’s often because we forget that greater is He that is in us than He that is in the world (1 John 4:4).  Don’t fear your challenges, your enemies, or your obstacles… it won’t do you any good anyways.  These problems are actually your weapons once you choose to stop avoiding them and actually INGEST them into your life.  Your path to victory is through them, not by going around them.  I would like to encourage you that no matter what level of genocidal apocalypse you are facing, just like Esther you were placed intentionally where you are for a reason.  It may seem dangerous and hostile, but as Yoshi can tell you it is only when you are up close to the enemy that you can do the most damage.. in his case by consuming them.  Ask Joseph, the guy in Genesis who was sold by his brothers as a slave, falsely accused of rape, and thrown in to prison what he thinks about using his enemies as weapons for good…

Genesis 50:20 But as for you, you meant evil against me; but God meant it for good, in order to bring it about as it is this day, to save many people alive.