It’s a funny thing… every year the cry of gamers around the world is heard as we decry the formulaic release of titles that do too little to differentiate themselves from the previous year’s iteration.  This paradigm is most specifically observed during this time of year, as rampant “sequel-itis”  takes hold with its annual pilgrimage to the land of Assassin’s Creed, Madden, Call of Duty, Battlefield, a random Lego game based on whatever franchise they can get their hands on, and the four billionth version of Just Dance.   Seriously, who is still playing this?  Who is still “Just Dancing”?  Please… for all of us as well as for the sake of Lady Gaga… please just stop.  It’s time to let it go.  For those who are not guilty of allowing this franchise to live while Kingdoms of Amular was forced to die a painful death… I apologize for this digression as well as taking you from Lady Gaga to Frozen in the span of one sentence.

So… the complaints roll in that each title is just more of the same and not enough to warrant another purchase.  We want creativity… something new and different, risky and bold.  Like a Doritos Locos Taco.  (Don’t hate… this was a marriage made in heaven.  As were nacho fries… simply too beautiful for this world).  And in like an unexpectedly new menu item on a Taco Bell drive-thru menu steps a title like Fallout 76… but is it what we really want?  The response to the Beta tells a different story.

Fallout is a well-respected and beloved franchise that honestly hasn’t yet over-stayed its welcome, so it would have been forgiven for simply giving us another high-def wasteland to adventure around in for a few hundred hours or so.  But instead of taking the easy road, Bethesda opted for the road less traveled and made a game with an experience that is almost entirely predicated on the people you find to travel with.  And with this unique answer to a question that wasn’t really asked we are about to embark on an open-world Fallout that is entirely populated by real human beings rather than the safe, predictable NPC’s (non-playable characters) that we have been accustomed to for so long.  A fully online title where every character you meet is a person just like you (except with the likelihood of a lesser focus on hygiene) version of Fallout.  How could it go wrong?

The benefits and the risks are one and the same.  By stripping the game of the richly fleshed out characters that we are accustomed to receiving missions from and performing the fetch quests that will save their child/dog/robot/socks, we are now entirely on our own to make meaning out of the sandbox we have been given.  And what will we do with that freedom?  Unfortunately, whatever we want.  And therein lies the dilemma that was observed during the Beta access.

See, people are unpredictable.  Reckless.  Occasionally ornery.  Selfish.  And often fallible.  You may find that someone is simply standing there and while you are trying your best to interact with them, they are not moving.  Are they ignoring you?  Baiting you into a hostile response?  Or simply making a sandwich?  Who knows?  Will the travel companions that you have chosen actually be helpful or are they leading you to nowhere?  Are they going to attack you or assist you?  Or maybe both, and in which order?  And with that the root cause of the problem has been exposed.  A game predicated on people is the highest possible risk, because so often we are the problem.

Many times when I talk to people about God, their chief issue with belief is not the lack of desire to believe in a higher power or a Creator… it is the impact of His creation, namely mankind, that proves to make belief difficult.  Stick with me on this… most people are not struggling with the idea of a supreme Being, but rather that so much horrible stuff happens down here on this blue marble called Earth that it makes it hard to accept that a good and benevolent Deity would permit such things to exist.  Death, the plight of the hungry in third-world countries, the homeless epidemic, diseases like cancer… these real world issues make it hard to understand how a loving God could create a world in which such horrible things exist.  And the truth is… He didn’t.  He made us and WE did the rest. 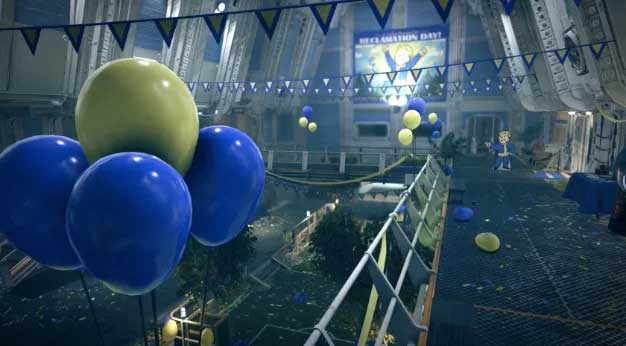 Why do bad things happen to good people?  And why do the bad people tend to wind up with the things the good people lose?  The reality is God made the ultimate open-world and we have determined what has happened from that point forward.  Much like the challenges inherent within Fallout 76, we were given an empty planet to interact with and build into whatever adventure through life that we want.  And for every honorable choice a dozen purely selfish consumptive acts take place.  The trickle down effect of each of these choices has resulted in the world we find ourselves in… we were given the gift of free will and have nobody to blame but ourselves and our predecessors unfortunately.

Can we do better?  Without Divine intervention, the answer over the last many thousands of years is a flat NO.  Our best and brightest still succumb to the various temptations of this planet, and just like in Fallout even the most loyal and courageous adventurer is still going to make a foolish choice either through intention or honest error and everyone travelling with them will inevitably pay the price.  The problem with basing a game experience or a world-view off of people is identical… people will inevitably fail you and let you down which damages your ability to enjoy the overall structure of the world you are occupying.

Here is where the rubber meets the road.  If we make a random choice in Fallout to travel down a new and exciting road, meet some interesting new partners to quest around with and then meet your doom either through their folly or betrayal… who owns that? Not the developers of the title.  They did not have anything to do with it and merely created a world intended for fun and enjoyment.  Not the store or the clerk that sold you the game, or the UPS driver who drove it there.  Not even the platform you chose to play the game on.  The fault lies not in the game or its code or even the lengthy chain that led from the disc being created, stamped, packaged, shipped, delivered, and ultimately purchased.  It lies in the human beings that are partaking in the experience with us and their ultimately fallible nature.

Being honest, sometimes… many times actually… I struggle with trusting God in a world that seems bent on taking away everything I love and value.  While I am responsible for all of the choices and ramifications of the personal decisions I have made in my life, there are also many areas in which I feel a bit helpless and undeserving of the problems that exist.  People do not choose to be born into a poverty-stricken environment.  Nobody volunteers to become a victim of human trafficking or signs up on a waiting list for cancer.  These are all repercussions of choices made by the wasteland wanderers all around us, both past and present.  It is a wise and kind God who created a world full of choice and opportunity, and He has withheld nothing including the life of His own Son to make this world and the life to come a better place.

So to the end game… God does not need an apologist.  He didn’t create sin or its consequences.  He created free will and we made all of the choices from that point forward.  He still intervenes, listens to our prayers, and often answers them.  But for Him to make the world perfect He would have to remove us from the equation.  Don’t allow these temporary struggles, as great as they may seem, to alter your view of the loving God who crafted you.

The great thing about Fallout is also its curse… your time spent in the wasteland will be whatever you make of it.  Whether you start ahead or behind, ultimately the journey you choose to take and the attitude you bring with you will determine your level of satisfaction.  If you are expecting a ride without bumps you should plan on being disappointed often.  If you think nobody will ever betray or fail you and your enjoyment/contentment will require that to be true… you should probably stick to a single-player game and leave this one alone.  But we do have a guarantee in the wasteland.  The One who will never leave you or forsake you will be by your side for the entire experience.  From one vault dweller to the next… it’s the only way to travel.

John 16:33 These things I have spoken to you, that in Me you may have peace. In the world you will have tribulation; but be of good cheer, I have overcome the world.”