Answering the Unpreventable Call of Duty: Death in the Script (Luke 24:15-21)

There was a time when it wasn’t this way.  Believe it or not, there was a point in time in which Call of Duty was not an annual “thing”.  And while the jury is still out on whether or not this is a good thing, the reality is that this has become an expectation… every year there will be another Call of Duty, it will be the biggest money-making day in the history of all entertainment, and at some point in the game you will DIE.  Not just you as a player, I’m DEFINITELY used to that – but an actual character you are playing as is eliminated from the story PERMANENTLY.  While this has become a bit of a cliché now, in my original experience playing Call of Duty 4: Modern Warfare this was a possibility that had never occurred to me.  For years I had died every death imaginable in each game I had loaded up, but for every cry of “SNAAAAAAKE!!!” as I perished yet again in Metal Gear Solid, there was a press of a retry button and presto – it’s like it never happened.  But not this time.

Today I am a soldier racing against time trying to prevent a nuclear detonation – I have faced down much worse odds in countless other stories, so I have no reason to believe I won’t succeed this time.  When the nuclear explosion occurs despite my best efforts to stop it, I am stunned momentarily; but since I still have control of my character and realize this is not a cut-scene, I figure there is still something to be done, right?  Unbeknownst to me is this is a scripted moment of death for my character, and I am already living on borrowed time.  I stumble towards a building in a feeble attempt to take cover from the nuclear fallout, and as my vision becomes blurry I start to panic.  I press the analog sticks feverishly in the direction I am sure will provide me safety but now I am barely moving at all.  I mash the jump button as if that will somehow propel me to shelter faster but it is to no avail.   In a moment that I have never forgotten to this day, my character falls over dead and I am powerless to do anything about it.  The game moves on to the next level, simply flashing “K.I.A.” on the map screen as a final epitaph on the character I have been playing as for hours.

I sat dumbfounded, wondering what I had done wrong, racking my brain for solutions.  I reloaded the section and tried it again multiple times, thinking if I could only complete my objective faster, kill enemies in sections with greater accuracy… just do SOMETHING different so that maybe I could change this outcome.  After multiple futile attempts to change my characters destiny, I turned to the internet for guidance, believing there was some soul out there that would have the answer I was looking for.  And there in the forums I found the answer, and the truth of the situation – no matter what I did, regardless of what path I took, the outcome was inevitable.  I was going to die.  The bomb would go off, my plane would crash, and I would taste the effects of a nuclear blast first-hand.  My death was in the script from the very beginning, and I was marching towards this conclusion from the moment I put the disk into the tray. 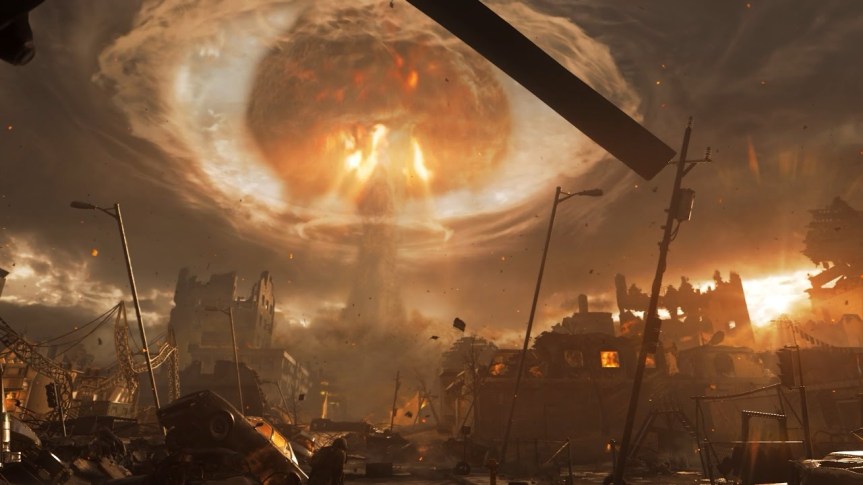 The followers of Jesus during his life here on earth know all too well these same helpless feelings.  Consider for a moment that you do not know the ending to the story, and walk with me for a few steps in their sandals.  For three and a half years Peter, James, John, and the other nine disciples of Jesus followed Him everywhere, sharing the same accommodations, eating every meal, and growing as a family as they traveled across the country.  They lived His life alongside Him from the start to finish of his ministry, and watched Him grow from a local teacher to the most polarizing celebrity of His time.  His miracles were displays of supernatural power that were previously unheard of.  His debates with the cultural leaders of His day were legendary, and His teachings were revolutionary.  Jesus was more than a leader, more than a friend – He was their HERO.  He was a hero incomparable, unable to be bested in word or deed, and invincible – certainly not a candidate for the future that awaited Him by their view. 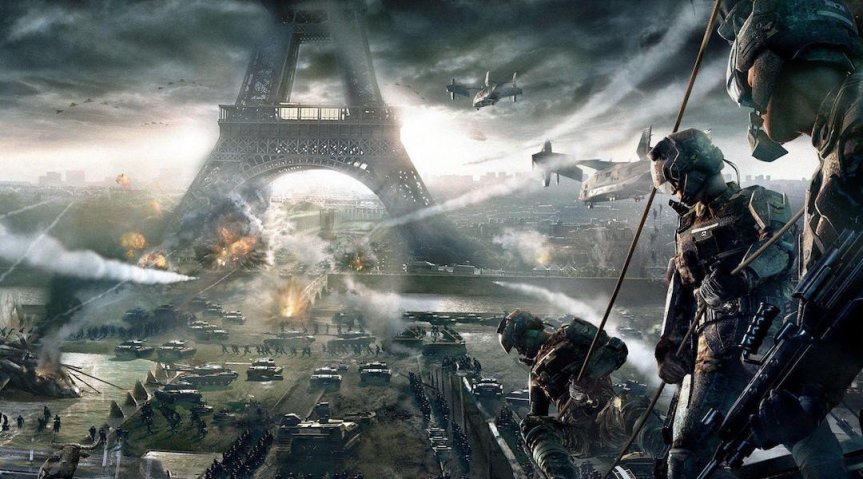 The thought of Him being captured by His enemies was almost impossible to fathom, but even when He was being marched away to a biased jury of the jealous hypocritical priests who He had been one step ahead of His whole life, there was still that unshakable feeling that He was still in charge.  Even in their fear, several continued to follow at various distances, waiting for the man who had demonstrated his mastery of the elements so many times before in such incredible and unbelievable ways to come through one more time.  It was inconceivable to consider He could actually face execution, much less willingly submit to it – I mean, how can God die?  Surely He has one more miracle up His sleeve… He holds the ultimate controller, so why doesn’t He just, you know, type in an invincibility cheat, enter “God mode”, and wipe the floor with these fools?   He could call down an army of angels with just one word… only… he doesn’t.

Matthew 20:17-19 Now Jesus, going up to Jerusalem, took the twelve disciples aside on the road and said to them, “Behold, we are going up to Jerusalem, and the Son of Man will be betrayed to the chief priests and to the scribes; and they will condemn Him to death, and deliver Him to the Gentiles to mock and to scourge and to crucify. And the third day He will rise again.”

Instead we reach the brutal finale – a naked, beaten, quivering mass of flesh that His own mother could not even recognize, hung to a pair of planks for the open viewing and mockery of all of his detractors.  As His friends and family watched in horror, a script that had been written before the very dawn of time played out before their tear-filled eyes as His story seemingly ended in a scene that must have felt surreal.  Mere days before He had entered this very city in that centuries’ version of a ticker-tape parade.  He was the talk of the town.  Their association with Him, their HERO, was their greatest source of pride, and had become their very reason to live.  And now this… this impossible to understand sequence of events that went faster than they could process.  As they ran for safe places to hide, mourn, and just try to find the sense in this, were their thoughts much different from the helplessness I felt as I realized every decision I made was inconsequential to the end result?

Do you ever feel that way?  Helplessly drifting along in the story of your own life, frantically pressing rewind in your mind’s eye to figure out what you could have done differently, longing for a different outcome in a situation, and searching every possible outlet for answers to what went wrong?  I have been there too – no, I’m not referring to my video game adventures now, but in real life we all have these “nuclear” scenarios in which we feel out of control, stripped of choice, and propelled to an undesired outcome through events that are out of our hands.  Losing loved ones to terminal illnesses, broken hearts, sudden financial upheaval, the betrayal of a confidant – the list we all face at some point goes on and on.

Listen to the voices of two of Christ’s followers after the crucifixion and burial… as they are walking down the road the very Hero they were mourning was right beside them but they were too buried in their grief, disappointment, and loss to recognize Him.  And as they walk down that sad road, too blind to see the literal answer to their prayers in their presence… well, let me just let them tell it with their own words:

Luke 24:15-21 So it was, while they conversed and reasoned, that Jesus Himself drew near and went with them. But their eyes were restrained, so that they did not know Him. And He said to them, “What kind of conversation is this that you have with one another as you walk and are sad?” Then the one whose name was Cleopas answered and said to Him, “Are You the only stranger in Jerusalem, and have You not known the things which happened there in these days?” And He said to them, “What things?”  So they said to Him, “The things concerning Jesus of Nazareth, who was a Prophet mighty in deed and word before God and all the people, and how the chief priests and our rulers delivered Him to be condemned to death, and crucified Him. But we were hoping that it was He who was going to redeem Israel. Indeed, besides all this, today is the third day since these things happened.

Well, just as Jesus had a PRETTY big surprise for them I have some good news for you – the very script that right now seems to hold only trouble and pain for you is NOT OVER.  No, not by a long shot.  See, Jesus endured all the pain and agony of his betrayal and death knowing that the storyline called for a different kind of hero than what his followers were looking for – not a conquering king for the current era, but a Savior for the ages.  And while you might wonder how anything positive can currently come from the circumstances you are dealing with, let me assure you that the Bible says all thing work together for the good of those that serve God’s purposes.  So take heart, unpause your game, and buckle up for Act Two – because as long as we serve God we have the assurance that every sorrow, every pain, and every heartache will be accompanied by unexpected victory from sources we cannot even imagine yet!

Romans 8:28 And we know that all things work together for good to them that love God, to them who are the called according to His purpose.

I finished Call of Duty, and in future iterations of the franchise I braced myself for the possibility that my character may die unexpectedly, and that it will be okay.  And now that I am prepared for that possibility, not only does it fail to take me by surprise when it occurs, but my expectation of it sweetens my outlook as I eagerly wonder what incredible swerve the writers have in store for me next.  And in life, the Author of all things has written each of our stories from start to finish.  He is never surprised by anything that happens, and every experience in life will make your relationship with Him stronger if you learn to trust Him and His plan.