Within all of the sub-genres in video games there is a very specific style of gaming that belongs almost solely to a developer named Telltale Games.  Their releases are a collection of cinematic, choice-driven, narrative-focused games that seem to pride themselves on being distinctly different from all the other titles that clog the shelves at your local game store.  Leveraging such venerable franchises such as Batman, Guardians of the Galaxy, Minecraft, Back to the Future and so many more… these can definitely be a bit of an acquired taste for those who prefer their games either a little more action-oriented or perhaps with a more realistic visual style, but for those who have endured the dive into these unique waters there is truly nothing like these games on the landscape right now.

Every decision within these games create a splintering effect that leads you down a different path, but what may be the most interesting aspect is how every character in the game responds to your choices in their own unique way. Each time you reach a “decision point” the screen notates when you have made a decision that will have a future impact and perhaps serious consequences with the haunting caption “‘Insert name here‘ will remember that”.  And with those simple words in the top left hand corner of the screen, the worries and the regrets begin.  Did I make the wrong choice?  What will this end up meaning, either now or in the future?  Are they happy?  Mad?  Constipated???   It’s hard to say.  Whatever this ends up impacting in the future, one thing is for sure… they are going to “remember” what you either said or did and it will invariably come up in some way later on down the line. 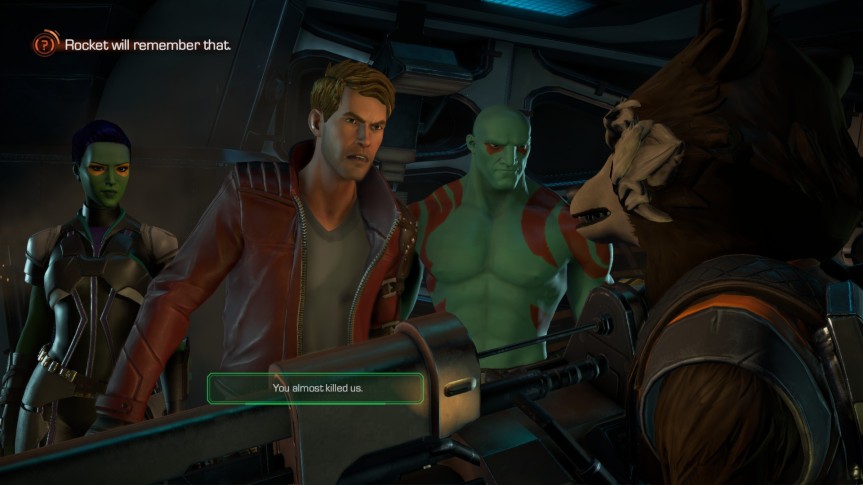 This concept of “remembering” has a bit of a negative connotation to it, doesn’t it?  Even in the instances where you made a choice that seemed to generate a positive reaction, there is an under-lying concern that even the right call may not end up coming out in your favor.  What is this other character “truly” thinking?  What are their motivations and how have they changed based on my dialogue choice?  And while this makes for a compelling gaming experience with a ton of replay value, it’s a scary and stressful way to live your real life.

For many years this represented my view on God, if I am being honest.  After reading countless Bible verses on how Holy and Righteous He is, it was hard to escape the idea that He is sitting up in heaven receiving daily reports on my wickedness from my guardian angel/tattletale and keeping a ledger of each and every stupid choice I make.  And each time I am given a branching path in my life, I would look up in the left-hand corner of my screen after I made my choice to see those fateful words “God is going to remember that”.  Doesn’t that send chills down your spine?  Every word, every action… every THOUGHT?  He is aware of ALL of that and more.  He knows the total count of the amount of the hairs on each of our heads, and in my case He is subtracting from that count DAILY so I know He has an active challenge there.

But here is the wonderful thing about all of this.  The God who knows ALL things has made a CONSCIOUS choice to NOT remember our sins.  The omniscient Creator has chosen to “forget” the sins of those who have chosen to receive this gift of not just forgiveness, but FORGETNESS.  And yes, Mr. or Mrs. Dictionary, I know that’s not a word.  But can I be honest for a second?  Forgiveness IS a beautiful thing, but the ability to completely ERASE what I did wrong from someone’s memory?  That’s a super power I would give ANYTHING to possess.  And I have a feeling I’m not alone there.  Check out Isaiah 43…

Isaiah 43:25 “I, even I, am He who blots out your transgressions for My own sake; And I will not remember your sins.”

Blot out… that’s sounds pretty final if you ask me.  But the actual Hebrew word used here is “machah” meaning to ABOLISH or “DESTROY”.  So if “blot out” doesn’t sound aggressive enough for you, try that one on for size.  It is actually the same word used when describing how God destroyed or “blotted out” all living things during Noah’s flood.  Check it out in Genesis 7:23… He is not merely offering forgiveness for sins… we have been telling people this all wrong for so many years.  He is offering “forgetness” for sins… and yes, I’m still trying to make that word happen.  They are GONE.

But how does this work, you may ask.  All these years I have been praying to God for forgiveness and failing to realize that it is His forgetting of my sins that He has promised, not just forgiveness.  The writer of the book of Hebrews delivers the final piece of insight on how this is possible…

Hebrews 10:14-17: And every priest stands ministering daily and offering repeatedly the same sacrifices, which can never take away sins. But this Man, after He had offered one sacrifice for sins forever, sat down at the right hand of God, from that time waiting till His enemies are made His footstool. For by one offering He has perfected forever those who are being sanctified. But the Holy Spirit also witnesses to us; for after He had said before, “This is the covenant that I will make with them after those days, says the Lord: I will put My laws into their hearts, and in their minds I will write them,” then He adds, “Their sins and their lawless deeds I will remember no more.”

He starts by explaining that the Old Testament method of atoning for sins provided forgiveness, but they did not TAKE AWAY sins.  Only in Jesus Christ’s act of sacrifice on the cross and our reception of His blood was sufficient to erase every sin that had or ever would exist.  And with our acceptance of His sacrifice He has not only removed our sins, but erased them from His memory.  Abolished.  Destroyed.  Purged from existence.

I’m going to challenge the way you have been thinking about the Father’s forgiveness of your sins.  Do you truly look at the mistakes you have made as something that has been destroyed, just like everything that was wiped out in Noah’s flood with a full reset?  Or do you still feel like in the corner of your screen in life it says “God will remember that”?  Because if you have nailed them to the cross, then my friend… they have been FORGOTTEN.  Totally and completely.  And while the devil would like nothing more than to keep you locked in a fear pattern of your old sins hunting you down to destroy you, that is simply some old-fashioned screen burn (remember when PC monitors used to do that?) and it is NOT reflective of the reality of a life lived in the FORGETNESS of our Lord.

Yes, I used it one more time.  And I hope this repetition has made this sink in for you.  He does not remember your sins.  And you don’t have to either… walk in freedom.

Find our video version of this blog below!